Why couldn't the Viper vipe her nose?

....Because the adder ad der handkerchief! My dad used to tell me this joke every time I went out looking for reptiles, followed by a story of woe regarding adder bites.

Despite his tale, and his bad joke, as a young boy I remember spending many hours searching for reptiles. In those days they were commonplace and I would regularly find abundant numbers of common lizard Zootoca vivipara and slow-worm Anguis fragilis. Grass snakes Natrix natrix used to hunt in our garden pond and adders Vipera berus were regular in the field behind the garden. Sadly those days are long gone and with suitable reptile habitats being swallowed up by development, those individuals that are left are becoming increasingly fragmented.

Today the weather was ideal for looking for reptiles, bright sun with occasional showers, cool air temperature, just ideal for basking reptiles. The adder is Britain's only venomous snake and contrary to its fearsome reputation, it is not considered to be an aggressive species. Male adders have black zig-zag markings on an off-white background; the head pattern varies and comprises an inverted 'V' or an 'X'. Females typically have brown markings on a light brown background, but both are extremely variable. The eyes are red with a vertical pupil.

I arrived at Browndown, today's chosen site just after 9am, and it was not long before the first adder was seen. It was curled up on the edge of a patch of bracken, and made no attempt to move as I approached for a photo. The first individual was a male, and the distinctive zig-zag along its back blended perfectly with it's bracken surroundings.

The next adder was a female, and its generally browner colouration blended in even more with its surroundings. This individual was more concealed but also more alert and quickly slithered off into the undergrowth.

As I continued to search it was apparent that I had got the conditions right as there were several animals basking. They were all situated on the edge of vegetation on the east facing side of vegetation, well-placed to catch that morning sun.


Wholly black, melanistic adders can be found, and I remember seeing one not far from my home a few years ago. Even though they are mainly black the zig-zag pattern along the back is still usually visible, but if you are unsure that it is an adder, check out the eye.


I was on site for only about an hour and by the end of my visit I had found nine individuals, which was made up of five males and four females, a very successful day.

Posted by Trevor Codlin at 20:46 No comments:

For me the weekend of 14th - 16th March was all about Whalefest. It started early with a journey from my home to the Plant Whale office in Brighton, and then on to the Brighton Metropole, where the event was being held. The event was expected to attract around 10,000 visitors, and when you looked at the variety of events on offer, it was easy to understand why. 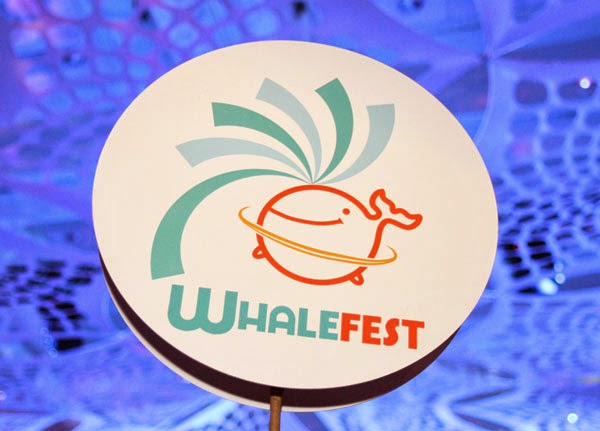 I arrived at the Planet Whale office, to find my great friend and co-founder Dylan Walker waiting. We had a busy day ahead, helping to set up things at the Metropole, but also organise events planned for later on Brighton Beach. As well as the main Whalefest event on the Saturday and Sunday, there are many fringe events that go on around the city. Todays event was releasing a life-size inflatable killer whale into the sea, with the help of Dr Ingrid Visser, Virginia Mckenna and the British Divers Marine Life Rescue.

The event was planned to highlight the 'Long Swim to Freedom' campaign which focusses on the plight of whales and dolphins that are held in captivity throughout the world. Particular emphasis was being put on Morgan, the young female orca that is been kept in captivity in Loro Parque in the Canary Islands. Morgan was found stranded in The Netherlands and taken into care, but rather than release her back into the wild after recuperation, she has been incarcerated in a Loro Parque pool since.

The release event went well with hundreds of people turning out to watch it. I have to admit seeing a life size inflatable killer whale lifted off a trailer that was towed by the Born Free Foundation, by a giant crane, carried down to the sea and then towed out by the British Divers Marine Life Rescue, was not something that you see every day in Brighton, but it really got the crowd going.

Saturday 15th March
The theme for Saturday was captivity, and getting whales, dolphins and other animals released. The event opened at 9am and there was a crowd of expectant whale-festers waiting as the doors opened. The event calendar was packed with the crowd pulling events all being held on the main stage. Gok Wan opened the event officially, followed by presentations from Dr Ingrid Visser, Virginia McKenna and Steve Backshall, a captivity question time was headed up by Dr Naomi Rose and Haruyoshi Kawai presented Light Animal.

There were of course events, presentations, exhibitor stands and displays throughout the two floors, with so much to see that many people had purchased weekend tickets. The display below was a memorial to all the whales, dolphins and sharks that had died in captivity.


The event closed at 17:30, but at 19:30 the doors were open again for a directors cut of the movie Blackfish. The event was hosted by Dr Naomi Rose, Dr Ingrid Visser,  Samantha Berg, Will Travers and Miranda Krestovnikoff. They all chose their preferred clip from the movie and then spoke about why they had chosen it; this was then followed by a question and answers session with the audience. A truly excellent way to end the day.

Sunday 16th March
The theme for Sunday was the plight of Maui’s Dolphin, a beautiful dolphin from North Island, New Zealand. The species has undergone a dramatic decline in numbers as a result of bi-catch. There are now only 50 Maui’s dolphins left and the failure of New Zealand’s government to ban the use of gill nets in inshore waters, is pushing the species closer to extinction. Dr Barbara Maas, head of Endangered Species Conservation at NABU International, is driving the campaign to save Maui’s dolphins.

The event closed with a campaign update from co-founders Dylan Walker and Ian Rowlands which announced that the event had raised £10,000 for the events campaigns. It was a resounding success with thousands of visitors passing through the doors. Unfortunately I did not get time to see much of the event as I was working, but there are many high points for me.

To see so many children at the event was brilliant, hopefully some of them will be the next generation of whale and dolphin campaigners and Whalefest volunteers. The image above highlights this perfectly; this young's lads mum was calling him to leave but he just stood captivated by Rob Pilleys filming of dolphins.

The Whalefest volunteers are an amazing and dedicated group of people who give so much time to make this event work. If you are interested in becoming a volunteer please contact Planet Whale at www.planetwhale.com.

I end this post with the image below which illustrates how many carrier bags one shopper collects over the course of one year. The sad fact is that much of this plastic is not biodegradable and ends up in our oceans. The impacts of plastics in the oceans on seabirds and cetaceans has been well documented so please help it stop. 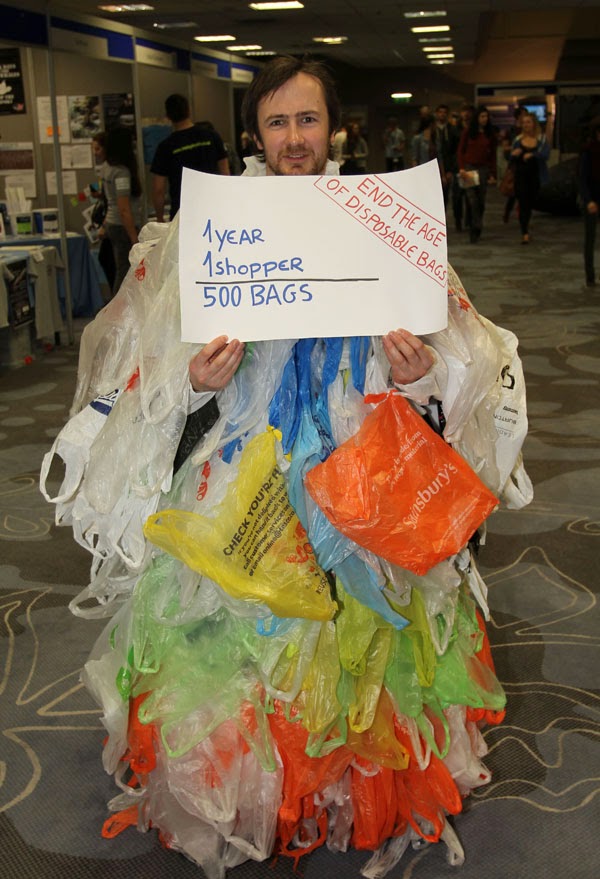 There is no better sound than that of the sound of spring, and the start of the dawn chorus. Blackbirds, song thrushes and robins are usually the first to start and their song makes the pre-dawn start for bird ringing all the more worthwhile. With the lengthening days the weather has calmed too, which has meant in the first 10 days of the month more birds have been ringed than in the whole of January and February. The majority of the sessions have been at Manor Farm Country Park, but this weekend I ventured back to Botley Wood for the first session of the year.

The sessions at Manor Farm have again been targeted on gathering data for the House Sparrow RAS project. The RAS season started on the 1st March and so the aim was to get as many retraps as possible. The season started well and with 16 new birds ringed and 15 birds either sighted or retrapped. The usual species were also ringed including Wren, Dunnock, Robin and Blue, Great and Long-tailed Tit.

A species that is grossly underestimated by many is the Common Starling, a striking species in the field but truly stunning in the hand. The pale tips contrast strikingly with the metallic violet and green sheen to the main part of the feathers. In the summer months the bill becomes bright yellow, except for the base that is, which turns blue in a male and pink in a female. The image of the male below illustrates this perfectly.

Six new Redwing have brought the total this year to 20 and another Fieldfare was the second of the year. According to the pattern on the head feathers, which showed very little black other than along the shaft, this bird appeared to be a female.


The session at Botley Wood was more about cutting in net rides in preparation for the arrival of spring migrants, particularly Common Nightingales, but we still put a couple of nets up just in case. Surprisingly there were no spring migrants around not even the odd Chiffchaff, but two Eurasian Woodcocks, a Siskin and a Kingfisher made the visit worthwhile. In contrast to the ringing which resulted in two each of Blue Tit, Wren and Robin, so not really with the effort.

The warm spring days have seen the level of invertebrate activity increase dramatically, Brimstones were abundant at Botley Wood and when I returned home there were Small Tortoiseshell's and Red Admirals in the garden.


Moth numbers have also increased as has the diversity of species and in just three session 15 species have been recorded in my garden. The species list has produced nothing as good as the recent Acleris literana recorded at work but has included Small Brindled Beauty, Clouded Drab and Twin-spotted Quaker.

Twin-spotted Quaker is common and widespread throughout Hampshire and the Isle of Wight with the peak month for its emergence being March. The other species recorded included  Early Moth, Early Grey, Hebrew Character, Early Grey, Diurnea fagella and the Common Plume Moth Emmelina monodactyla.
Posted by Trevor Codlin at 21:31 1 comment: