The ringing season is now all but finished for us at the Haven, although there may be the odd session to target certain priority species. Overall it ended up being a pretty good season, which was not immediately apparent at the start of the season. A total of 3960 new birds were ringed of 38 species, a further 177 birds were retrapped or controlled, a handful of the resident species, several times. 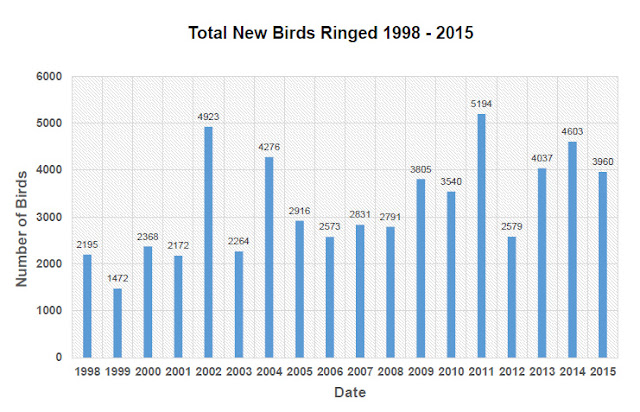 The anticipated eastern mega turned out to be a Barred Warbler, which for many counties is a regular vagrant, but not for Hampshire, where it was the first ever ringed in the county. The total is a little misleading in that it shows two birds being caught, but that is due to it being retrapped two days after the original capture, fortunately for me. Other highlights include a Wryneck, our 3rd ever, Tree Pipit our 8th ever and our first ever Grey Wagtail for the site. It was surprising not to catch a Yellow-browed Warbler this year, given how many were recorded on the east coast, but the expected record total of Goldcrests did materialise. A total of 158 new birds were ringed, beating the previous best total by 49, a couple of controls were also trapped, so the actual total of birds not previously trapped at the Haven will be 160. Other new high totals included Lesser Redpoll, with 23 new birds ringed, and Blackcap with an amazing 973 new birds ringed, well above the 495 average. 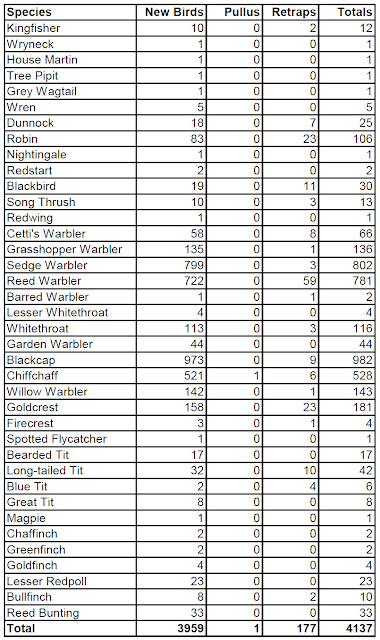 Our sixth year without an Aquatic Warbler is setting a very worrying trend.
Posted by Trevor Codlin at 21:40 No comments:

This morning I met Duncan at Farlington Marshes for a spot of ringing. The marsh was shrouded in fog, and it wasn't long before we were soaked, but at least that meant it wasn't windy. We set three nets in the eastern part of the reed bed, and almost immediately caught a Robin and a couple of Wrens. The next round produced a few Reed Buntings, followed by a few more and then a few more. Before we knew it we had ringed over 20 new Reed Buntings and retrapped one from a few years ago, and three Cetti's Warblers.


One of the reasons for going to the marsh was to try and catch some Bearded Tits. They have been very visible at the marsh in recent weeks, but have been showing at the top of the lake, and not where we were ringing. As it turned out we did not hear a single beardie, and were just about to give up when a pair suddenly appeared in the nets. Although we have been catching loads at the Haven, these are the first we have ringed at the marsh. There didn't seem to be any others around, but we well try again, when the weather conditions are right.

After ringing I headed home to dry out and warm up, before heading back to the marsh again. By now the fog had cleared  and the sun was occasionally breaking through. The main reason for going back was to try and catch up with some more Short-eared Owls. There have been reports of up to 4 birds and I was keen to get some photos. From the car park I worked my way through the bushes and towards the eastern track. I picked up a short-eared almost immediately flying over the main marsh, but decided to continue along the track to the sea wall. This turned out to be the right choice for me, as sitting in a meadow east of the track where 2 Short-eareds. They remained perched for about 10 minutes before starting to hunt and chase each other giving some cracking views.

I spent a good 30 minutes watching the owls before they dropped down into the field and out of view. I continued around the sea wall heading back past the Deeps and was quickly onto two more owls. These were a bit more distant than the birds I had just been watching but were in view almost continuously, even when feeding on the ground. One bird (below) was much paler than the others and I am inclined to think that this bird is an adult, and probably a male. Apparently females have a distinctly deeper buff ground colour overall, and the dark markings are usually bolder in males.


In the end I must of spent over an hour and a half with these owls, in light that was now just perfect. I continued around the seawall and stopped briefly to look over the lake. It was high tide now and there was a good variety of waders and ducks roosting. The most numerous wader species was Black-tailed Godwit, with Common Redshank and Grey Plover also present in good numbers. Other species included Avocet, Knot, Dunlin, Common Snipe and a lone Spotted Redshank. I could still see two Short-eareds hunting over the main marsh and another very distantly, that appeared to be hunting over the RSPB islands, could there really be five birds!

Posted by Trevor Codlin at 21:08 No comments: