I have had a few days off from work this week and so popped back down to Boscastle for a short break. The village itself was fairly quiet bird wise and most of the Fulmars had left their breeding ledges and returned to sea, and a few Shags loitered offshore. I had a couple of free moments during my stay so decided to go to Davidstow Airfield in the hope of a yankee wader. I started up by the old control tower and immediately picked up two Ruff.

Both birds appeared to be juveniles, since they were strongly tinged buff below, with dark centred feathers on the upperparts, again strongly fringed buff.

Continuing around the airfield I came across a mixed flock of Dunlin (16) and Ringed Plover (8) roosting on one of the concrete runways. They had tucked themselves down into tussocks of grass on the cracked runway; all of the Dunlin appeared to be adults, whereas the majority of the Ringed Plover were juveniles.

I decided to walk on to Crowdy Reservoir, as occasionally there are some interesting birds there. Five Common Buzzards, three Common Ravens and several Goldcrests were the pick of birds seen on the way; but at Crowdy Reservoir a lone Black-tailed Godwit was present on the northern bank, roosting with three Common Sandpipers. This was the first time I have seen this species here. Two Great Crested Grebe and a mixed flock of Herring and Lesser black-backed Gulls was all that was on the water.

I headed back to the control tower, seeing a couple of Northern Wheatears on the way, and the two Ruff again, before heading off home. On 29th I headed back to Davidstow for an hour, this time with the car which was just as well, because no sooner had I arrived the heavens opened, and boy did it pour!

The mixed flock of Dunlin and Ringed Plover were feeding on the grassland near the control tower, even in the pouring rain. It is amazing to see how these tiny waders are so hardy and seem oblivious to the harsh weather conditions.

The two Ruff seem to have moved on, but I did find another mixed flock of Dunlin and Ringed Plover in another part of the airfield. The only other bird of note was a juvenile male Northern Wheatear, that looked a bit wet after the downpour. 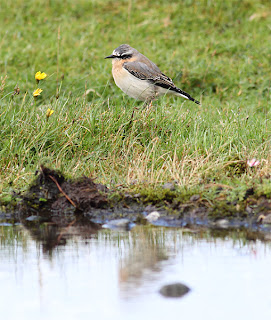 Despite its wet appearance it was easy to age this bird since its upperparts were heavily fringed with buff edging, and grey feathers were showing from beneath the brown juvenile feathers on the back. With the beginning of another torrential downpour I decided it was time once again to head home, no yankee wader for me this time.
Posted by Trevor Codlin at 22:23