Not much to speak of bird ringing wise this weekend, a couple of sessions in the garden was about it, so I spent much of the time birding. Saturday morning started with an early morning stroll around Botley Wood in search of colour ringed Common Nightingales. It was another cold start, with a heavy overnight frost but this did not stop the Nightingales singing. There appeared to be two new territories this week, one of which was in a remnant piece of vegetation that National Grid have left in place around their re-cabling works. The bird was showing very well whilst singing, so much so that I was able to get a great view of its legs and its colour rings. The bird was first captured last May as a first year male, meaning it was hatched in 2010, in the same location where it was singing this weekend.....during my studies I have found this species to be extremely faithful to a territory. I have watched one bird sing from the same branch 4 years running....no sign of my 8 year old bird yet though!

After Botley Wood it was off to Old Winchester Hill in search of migrants, but I think it was too late in the day as not much going on. In fact, a flock of about 20 Yellowhammers was the most exciting thing. 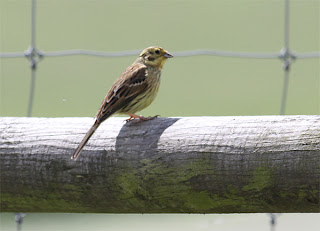 Years ago I used to catch quire a few Yellowhammers at Manor Farm Country Park, but in recent years they seem to have disappeared, which is such a shame. 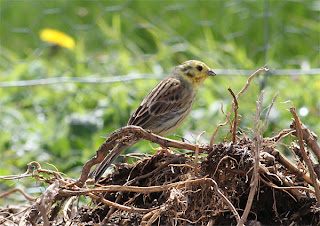 The birds were feeding on a newly ploughed field, and occasionally flying up on to the boundary fence where they gave excellent views. One bird was eyeing up a passing fly that appeared to be putting its life into its own hands...

....despite several attempts it failed to catch it!

As I was watching the Yellowhammers I suddenly noticed two birds on a posts in the next field...a pair of Northern Wheatears were feeding within the nearby Vineyard.

At this time of year I would normally expect this species to be migrating, but this pair seemed very settled, and with the numerous rabbit burrows available I wouldn't be surprised if they were breeding.
Posted by Trevor Codlin at 21:45