It has been nearly two years since my last post and I have been asked several times recently how our ringing studies have been going at Titchfield Haven, so here is an update.

We embarked on this year’s ringing with some trepidation; the extreme cold weather earlier in the year followed by the late arrival of some summer migrants and an almost two-month period without any rainfall, in the south of England at least, must have had an impact of our bird populations. For example, male nightingales at my study site had arrived late and in much fewer numbers, 50% less than in 2017, but those that did arrive appear to have bred successfully. Willow Warbler and chiffchaff numbers also appeared lower than usual whereas nightjar numbers were much higher.

As usual we commenced our ringing in the first week of July and weather permitting and keep going until early/mid-November. We have continued to ensure a consistent level of effort and use the same number of nets in the same locations as we have since 1998.

The ringing totals for the year up to the end of August, showing July and August separately and a grand total are below. 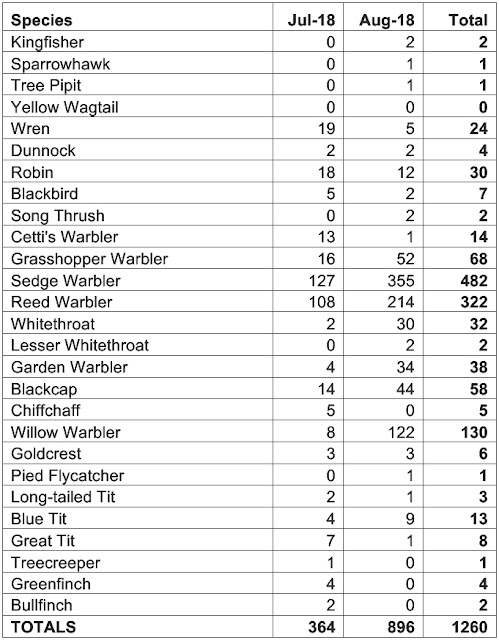 In isolation this does not mean much so some basic comparison of the more regular species is presented below. 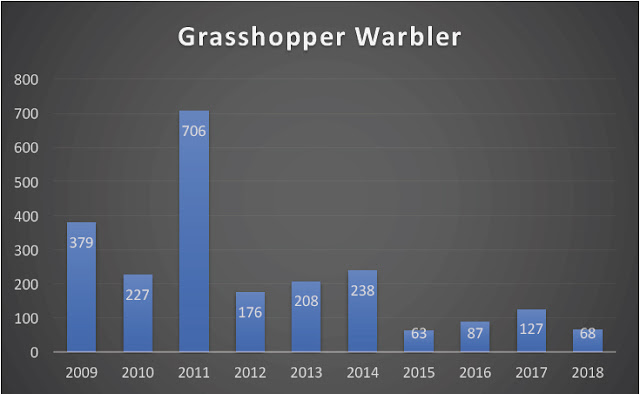 As can be seen with Grasshopper Warbler, the numbers are once again low by our standards, and have been for the preceding three years. The average number of birds caught across the comparison period to the end of August is 228, 2018 is proving to be well below average for this species. Obviously the average is skewed by the astonishing total of 2011, but even looking at the Median (192) this years totals is well below average. 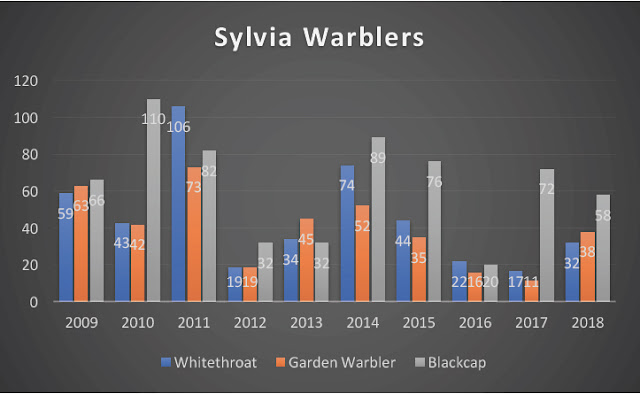 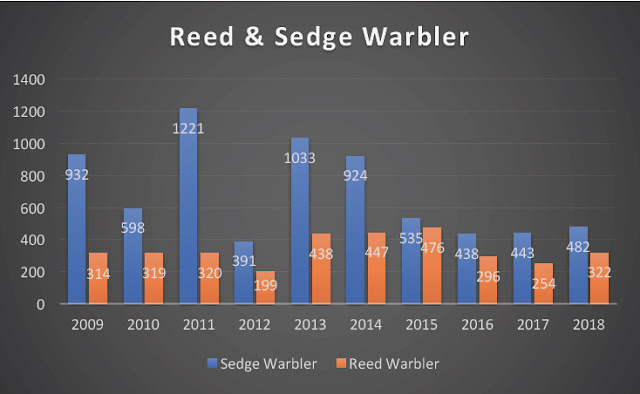 Through July and August the most numerous species we ring are Reed and Sedge Warblers. Reed Warblers are common breeders on the site so the early captures usually involve local breeding birds. The Sedge Warbler is a much rarer breeder and therefore most of our captures are migrants. Sedge Warbler numbers, at least early on, felt good to us but to the end of August the total was well below the average of 700. The Reed Warbler total for 322 is slightly below our average for the period (339). As with Grasshopper Warbler, 2011 was a very good year for Sedge Warblers, so will be skewing the results. Looking at the Median for Sedge Warbler (567) we are much closer to the average, but still down. 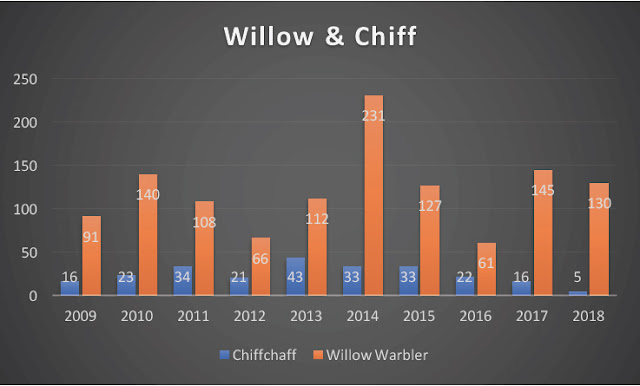 As with Reed and Sedge, Chiffchaffs breed on the reserve, whereas Willow Warblers do not and therefore our early captures of Chiffs relates to local breeders. This year breeding Chiffchaffs have been notable by their absence and this is reflected in the total of just five birds to the end of August. This total is well down on the average which stands at 25. By contrast it has been a good August for Willow Warblers, with the 130 bird total above the 121 average. Looking at the Median (120) the Willow total is still above average.

To finish up I thought I would share a few milestones that we passed in this, our 21st year, of ringing in this part of the reserve. These figures relate to new birds ringed and don't include retrapped birds and those controlled.